(a follow-up to the November 8 post I Sometimes HATE Novembers, as promised…)

So, here I was, in my insurance-paid-for-rented-condo, about a mile North of my home, while contractors rebuilt it, after the drunk driver had hit it two weeks prior.  That’s what I get for buying a corner lot, off a street that zig-zags.  Drunks never caught that nuance, head straight for the alley, see the power pole, and crash into my back yard.

It had happened before.  Last time it was just the fence that was destroyed.

I, of course, still had to go to work, pay bills, and check the mail at the house, all while surveying the excruciatingly-slow process of rebuilding the rear of my home and replacing the fence.

Thankfully (?) I was beginning to have more health issues (joy, joy) which meant I was missing more work. Which gave me the excuse to stop by and check the mail and the progress of the reconstruction more often.

And, it had been a couple of days since I had last checked the mail, and it was my birthday(!), so I thought I’d check the mail again.  Hell, there might be a birthday check from someone in the mail? 🙂

I pull into the driveway.  No contractors present.  This always bothered me, as this process was taking forever. Of course, mine wasn’t their only project.

(This had been a little over two weeks!)

AND THE SIDE DOOR WAS STANDING OPEN ABOUT TWO INCHES!

This alarmed me, as no one was around.  The door had been always locked and the extra key placed in one of those Realtor-access combination locks around the door knob.  Which was now nowhere to be seen!

I exited the car and drew my 1911 pistol.  (Yeah, I know.  All my training (which I had trained others to do many times before) was to leave the area to a relatively safe location and call the police to respond. After all, there may have been multiple armed intruders inside burgling my home!)

BUT, this was MY HOME!  And the training went out the window.  Sigh.

I slowly entered the kitchen, listening intently for any activity inside, pistol at-the-ready.  Then into the living room, bath and two bedrooms.  This was relatively quick, as it was a 740 square-foot house.

It was obvious someone else had been inside.  Someone NOT a contractor.  A home computer, portable television, stereo, some faux Samurai swords and a number of other items were missing.  Movers had taken many of the larger furniture items to put into storage prior to the reconstruction.  But I was told they were unable to take the gun safe, as they were prohibited from storing firearms.

They had removed the Dillon XL 650 reloading press from it’s mount, preparatory to the rebuild.  But had not put it into storage. (I guess it was gun-related).  It was gone.

And the 800 pound, Fort Knox gun safe was missing.  And this was on the floor… 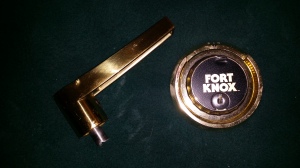 Someone obviously had pried off the combination dial and locking lever to open the safe.  And when that failed, THEY TOOK THE ENTIRE 800 POUND SAFE!

First, I called the insurance company, to see if they had perhaps authorized storage of the safe and it’s contents, and had inadvertently broken the locking mechanism somehow in transit.  Then, I called the mover and the police.

And was scolded by the 911 operator, as it was for emergencies only.   How was fifty+ firearms possibly out on the street was not an emergency?

Ultimately, the contractor, the storage guy, my insurance man and the police arrived on the scene.  I recounted my actions upon arriving multiple times for each of them.  And I was livid.  To keep me occupied (and busy and out of the way) the police advised me to make a list of what was in the safe, including all the firearms and serial numbers.

I knew most of their descriptions by heart, but the list (with Polaroids and serial numbers) was not around.  It was probably in the materials previously packed and moved to storage.

Fortunately, I still had many of the receipts and gun boxes, which were labeled on the edge with the numbers.

And set about making the list on a legal pad.

All parties were questioned.  The contractor’s employees all had cellular telephones they were required to keep with them at all times (for GPS tracking purposes).  And all passed the location test.

As if someone couldn’t have left the phone at home off-hours to do a burglary?  Or they told someone else?  Come on!  I never broadcast about the safe in my home, suddenly, after many strangers had seen it, it went missing.

After six months, the house was reconstructed, painted, re-floored (safe drag marks) cleaned (even clothes in the closet dry cleaned!) and restocked with the stored items.  I had called in to stop all my credit cards the same day.

I received a check for the maximum available from my policy.  (Note-to-self:  Make certain all valuables are covered, and if there is a cap it covers all firearms.  I was insured for a maximum of 5K on the firearms, eventually paid just over 7K total.  Firearm valuation of the missing?  Over 21K! in 2009 gun values)

And none of the identity items, credit cards or firearms have ever surfaced.

I’m thinking Mexico, and thank God that Fort Knox makes a quality piece of security equipment!  I suspect it’s abandoned in the desert somewhere, still unopened.  (Let this be a lesson – if you’ve not done so already, bolt your safe to the foundation and wall studs – even if it weighs 800 pounds!)

I had to use the insurance money for other things, and never was able to replace any of the missing firearms.

HAPPY BIRTHDAY TO ME!

FTC – Fort Knox safes gave me nothing.  I bought it at a gun show.  Leave me alone!

I'm a child of the 50's. libertarian, now medically-retired. I've been a certified firearms trainer, a private investigator, and worked for a major credit card company for almost 22 years. I am a proud NRA Life Member. I am a limited-government, free-market capitalist, who believes in the U.S. Constitution and the Rule of Law.
View all posts by guffaw1952 »
« Another Year…
The Magic Club »

4 thoughts on “November 24, Seven Years Ago”