This is no children’s joke…

NO, this is about STRATFOR

Earlier this year, private intelligence firm Strategic Forecasting, or Stratfor, published its Decade Forecast, in which it projects the next 10 years of global political and economic developments.

While international analysts often try their hand at predicting the major events of the coming year, Stratfor believes that it’s identified the major trends of the next 10.

In many ways, Stratfor thinks the world a decade from now will be more dangerous place, with US power waning and other prominent countries experiencing a period of chaos and decline.

An interest part of all this (which, in order to read, must be emailed free to you – if you are not a Stratfor subscriber) is little mention is made of the United States.  And the increase in ongoing, government-imposed tyranny.
We’ve a tendency, as participants in the American Experiment, to think ‘we’ will go on forever – I’m certain the Romans thought the same…
Still an interesting read.
(I’m not a subscriber – cannot afford it!)
h/t Brock Townsend

and good things will happen!

(as posted in full by Peter…)

If you’re a registered voter in the USA, it looks like your personal information has been compromised.

A whitehat hacker has uncovered a database sitting on the Web containing various pieces of personal information related to 191 million American citizens registered to vote. On top of the concomitant problems of disclosing such a significant leak to that many people, no one knows who is actually responsible for the misconfiguration that left the data open to anyone.

Researcher Chris Vickery … has his hands on all 300GB of voter data, which includes names, home addresses, phone numbers, dates of birth, party affiliations, and logs of whether or not they had voted in primary or general elections. The data appears to date back to 2000. It does not contain financial data or social security numbers.

Right now, thanks to someone’s carelessness, it’s free to anyone who can find what Vickery did. That means anyone in the world can find out where a person in the US lives and what political beliefs they may have. If they can find the database, scammers and marketing folk alike will likely benefit most.

I fear that in the age of the Internet, personal privacy has become nothing more than a contradiction in terms . . .

What To Do If You Face An Active Shooter

Questions are coming in about what to do if you face an active shooter. The short answer is slow down. Don’t rush into the action. Remember you are responsible for every round you fire—and if you shoot the wrong person, you will go to jail. Worse yet, you could end up getting shot by another Good Samaritan looking to stop the shooter.

Slow down. Gather information. See and understand the situation before you jump into it.

If you don’t know what is going on, keep your finger off the trigger. Observe before you act. Get as much information as you possibly can before you decide to engage.

REMEMBER – The vast majority of us aren’t SpecOps guys, or active law enforcement.  We have no duty to engage.  Speaking for myself, I’m an ‘armchair adventurer’ at best, and a old, crippled one.  And I don’t wear a cape or cowl.

From Ref Desk, one of my daily reads…

Burger King’s Triple Whopper with cheese has an amazing 1,230 calories. Hardies Monster Thickburger has 1,420 calories and 2,770 grams of sodium. Carl’s Jr.’s Double Six hamburger has 1,520 calories and 111 grams of fat. Most people need only 44-66 grams of fat per day, and most of them should come from sources like nuts, fish, and olive oil. – Provided by RandomHistory.com

I love how in their scary facts fat grams are listed in only one of the three examples!  Of course, one may extrapolate from the two items previously listed that they, too are not low in fat.

And, these hamburger sandwiches are named – presumably to attract customers – Whopper, Monster Thickburger and Double, respectively.

The Nanny State, in it’s infinite wisdom, has seem fit to force purveyors of food items to provide us – the ignorant public – with statistics and facts regarding the content of their wares.

As if we didn’t suspect a Monster Thickburger was unhealthy for us.  Or a dozen doughnuts.

What Is Wrong With American Health Care? 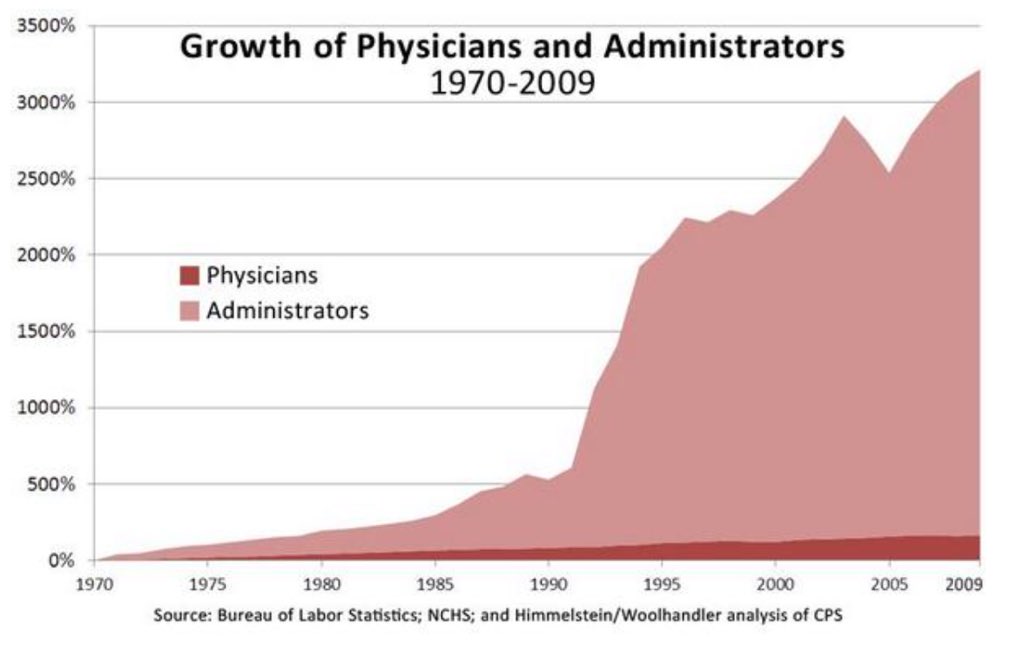 I’m fond of referring to my trial and tribulations with clinics, doctors, specialists, back-offices, et al in this blog as BUREAUCRATIZILLA.

Truth be told, I’ve encountered many fine medical professionals who have actually treated me, prescribed medication for me and followed-up with me.  I’m a diabetic and two-time cancer survivor (not to mention arthritis, tinnitus, bad knees, ‘old person’ problems, etc.!)

Sadly, it seems many doctors, while medically skilled, cheapen when it comes to staffing the back office. Numerous record and billing snafus, misunderstandings and scheduling problems have been the result.

And, if this chart is to be believed, it’s not going to get any better!  I suspect the ACA hasn’t helped streamline things, either.

‘Free’ health care?  At what cost?

Got up late, gotta leave.

As Don Benjamin (my high school English Lit. teacher) used to say when he’d (intentionally) run out his lesson plan:

My roommate did a fine job on the tree (which she also bargain purchased – it’s artificial!).  Sadly, neither one of us has enough money to do the holiday up right.

And she’s visiting her daughter in Tucson, today.

I visited my Sister’s for Christmas Eve festivities – here is a pic of nieces, nephews, grand nieces and grand nephews and my sister sporting their silly socks!  🙂  ♫You put your left foot in…♫

I’ve the critters to keep me company today, and a traditional dinner of Italian food later for which to look.

Santa didn’t bring me the woman I asked for!  Nor the guns!

But, I’ve a roof over my head, a 16-year-old car that sometimes works and fuzzy creatures to annoy, confound and entertain me.

And food for my belly.

Life is good – to all my friends, near and far,  MERRY CHRISTMAS!

When my marriage was winding down, my wife and I separated.  And we eventually got divorced.

It’s only by the grace of God we remained friends.  (And remain so to this day! 🙂 )

The separation was longer than most.  Eight years.  But, we lived apart, shared custody of Molly, equally (alternate weeks, with one alternate day in the middle.)  And living a little more than a mile apart, it ‘worked’.

But, initially, when she told me she wanted to separate, pain aside, it occurred to me that I wanted to do something extra special at Christmas for our daughter.

And I found these art pieces of little girls interacting in their world, by Frances Hook.

And determined I could probably afford one each holiday season, as a special gift to Molly.

Sometimes, getting funds together for toys, clothes and such was difficult.  And the statuettes were an additional hardship.

And she seemed to appreciate them, even when the tradition began, when she was age 5.

The first one was entitled “Birdie”.  I got it because I remembered her chasing sparrows in the park, trying to get one to light on her finger.   Calling out “Birdie, birdie!”

And so it was to pass she received a different one each year for Christmas.  It was nice as we all continued to share Christmases together.

But, Christmas 1994 found me having difficulty finding another Frances Hook porcelain statuette with a little girl in it that she didn’t already have.  Eventually, I did find one, though.

And I found out the reason for the dearth of sculptures.  It seemed, the artist had passed away the year Molly was born – 1983.  And in 1994, the porcelain figurines stopped production.

We lost Molly the next March.

I wonder if somehow The Universe had made the connection.

WHAT? Not Garlic Goldfish, AGAIN! :-)

The Garlic Goldfish (a perennial favorite Christmas snack) have arrived!

Actually, they were assembled by yours truly, in a couple hours standing at the iron skillet, Worcestershire, Blue Bonnet margarine and garlic powder at-the-ready.  Then slow baked until dry and toasty.

(For the uninitiated, this is a snack I’ve made traditionally for years.  Originally, I made standard Chex Mix, with the requisite addition of peanuts, pretzels and the like.  With a tablespoon of this, a dash of that.  I determined two things – people singled out the Pepperidge Farm Goldfish Crackers for consumption so the other ingredients were wasted, and screw this tablespoon-dash thing!)

I cover roughly 9/10 of the bottom of the skillet with Worcestershire, add 1/2 a stick of margarine, and sprinkle garlic powder generously.  Then marinate a pan full of crackers until they soak it all up.  Transfer all to a turkey roasting pan and bake @ 300* or so, turning every 10 minutes of so to check for burning, until they are all dry and crispy.  (I use Blue Bonnet because it’s cheap and takes the high heat.)

I used to make these in massive quantities for Christmas when I was employed and bring them into work.  It became such a tradition that folks would start asking me in September if I was bringing in goldfish that year!
🙂

Consumer Warning – they are QUITE addictive and go great with beer!  People consuming these snacks needn’t be concerned they will be molested by vampires, or members of the opposite sex. (Unless they, too, have partaken of the garlicky treats!)

FTC – neither Blue Bonnet, French’s Worcestershire, Pepperidge Farm Crackers or anyone else gave me anything!  I bought and assembled it all myself.  Go make your own – and Merry Christmas!

Last week, she ripped it into one million tiny pieces when three black people broke into her $8 million Cincinnati home and started beating her and her 79-year old husband.

“There’s three black men with guns at our house,” Dlott told a 911 operator after she escaped the home invasion and ran to her neighbor’s house one mile away.

And just in case the operator did not hear her the first time, Dlott said it again: “My husband and the dogs are still there. There are three black men with guns and masks at the house.”

That’s Racial Profiling 101: Identifying the criminals by race, as if that had something to do with it.
MORE HERE

I believe there’s a reasonableness factor.  If you (as an agent of law enforcement) are stopping folks going about their daily business because of their perceived ethnicity only – that’s profiling!

If you’re doing it because their daily business is criminal act – like burglary, armed robbery, drug dealing or smuggling, how they appear racially really doesn’t enter into it.

Unless you need to break radio traffic to broadcast a physical description of the suspect in flight.

Guys walking furtively in groups in a remote part of the desert within a few miles of the Mexican border who don’t appear to be hiking, legally hunting or just camping, and are Latino in appearance.  probably aren’t being stopped and questioned just because they appear Latino.

(Question – And why aren’t we actively patrolling the Canadian border, looking for Canucks who appear American and are taking pricier American jobs?  Inquiring minds want to know!)

Another area where political correctness will kill us – or probably kill law enforcement trying to do their jobs.

I used to know a State law enforcement guy who worked in an inter-agency gang taskforce.  He knew his rational thinking had been skewed when every Latino he saw screamed armed robber to him, and every Black was a burglar.

So he walked away from that job.