There’s a popular meme regarding firearms possession and safety:

Do you have your gun; it’s a bad neighborhood!?

As though crime doesn’t occur in ‘good’ neighborhoods…

(from my dear friend Brigid)

Stay in the Boat 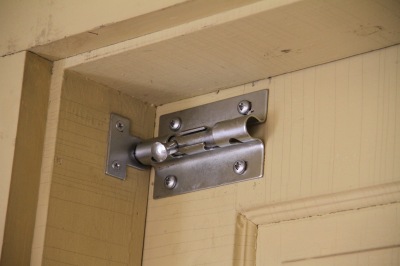 True Blue Sam the blogger is someone perhaps just a few of you know as a long time friend and commenter here.  He’s also something more special. He’s my father in law. He and my mother in law, both firearm owners and skilled and proficient shooters, had a home invasion on Thursday night. The person involved may have been high on drugs (I’m guessing meth) – he DID ransack one of the freezers in the garage, taking a ham hock, a tub of lard and some ocra.  Just saying.

No one was hurt, but there are lessons to be learned.  Not just the fact that the perp been detained earlier for a event, had a psyche eval (by Skype no less) and was released to continue his night of mayhem. But rapid response when this sort of thing happens. (Semi Auto is your friend).

We always worried that  being in the city that something like this would happen here, and in addition to our stickers shouting alarm system! we added extra bolts, top to frame  and bottom braced against a floor joist, for the walk out basement doors, in addition to cutting back shrubbery and adding extra lighting.

But this happened in a very quiet rural area, where the nearest “city” is houses, a barber shop and a church, just as they were heading to bed, and not thinking of defense.

Just some things to think about folks and we’re just thankful they are safe, though a vehicle was stolen and totaled (after getting some serious air time during a chase through the woods) and there was a lot of damage to the home as the perp used firewood outside to break out several windows in an attempt to get into the main house before hitting the garage.

First of all, thank God everyone is safe and well!
And ‘safe neighborhoods’?  No such thing!
It’s not paranoia if a threat really exists!

I'm a child of the 50's. libertarian, now medically-retired. I've been a certified firearms trainer, a private investigator, and worked for a major credit card company for almost 22 years. I am a proud NRA Life Member. I am a limited-government, free-market capitalist, who believes in the U.S. Constitution and the Rule of Law.
View all posts by guffaw1952 »
« There Is No Joy In Mudville
Phteven »

3 thoughts on “Yep, It Happens Everywhere!”