How To Spot A Concealed Handgun

The Art of Manliness (a blog to which I sometimes refer) not only addresses etiquette, style and proper behavior, but also delves into ‘manly’ things such as camping, hunting, shooting, unarmed combat and other esoterica.  (Of course, many of these subjects may be of interest to women, as well!) 🙂

A recent guest post was entitled as above.  I’m posting it below, in it’s entirety, not just to entertain and inform, but to show those who do carry behaviors and appearances which may bring to them unwarranted attention.

How to Spot a Concealed Handgun

The following is an excerpt from 100 Deadly Skills: Survival Edition — The SEAL Operative’s Guide to Surviving in the Wild and Being Prepared for Any Disaster. A follow-up to Clint’s first bestseller — 100 Deadly Skills: The SEAL Operative’s Guide to Eluding Pursuers, Evading Capture, and Surviving Any Dangerous Situation — this new survival edition offers primers on any survival situation imaginable, from wilderness scenarios, to terrorism and kidnappings, to natural disasters. 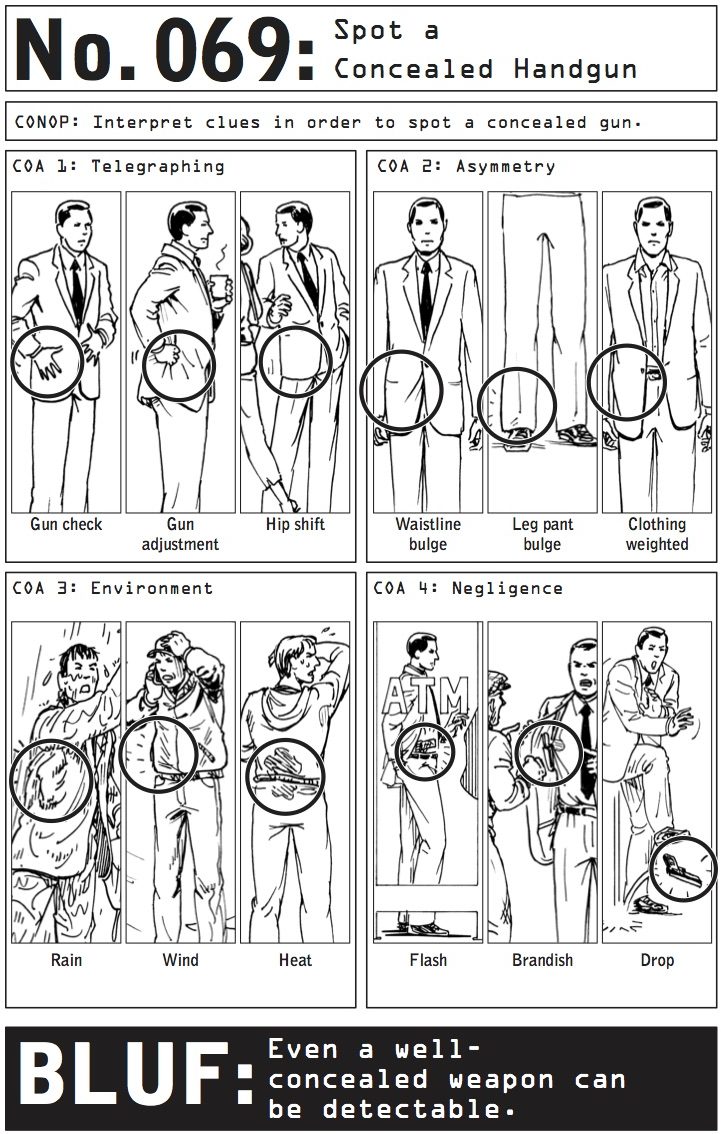 Individuals who carry a handgun professionally are well attuned to the range of mannerisms that can indicate the presence of a concealed weapon within their vicinity. Civilians, too, can learn to familiarize themselves with these signs and signals. When combined with suspicious behavior, the suspected presence of a concealed weapon should put bystanders on high alert.

Body Language: People carrying handguns tend to subconsciously telegraph the location of the weapon via their body language. They may reflexively palpate the gun to make sure the weapon is still safely in its holster, subtly re-position the weapon prior to sitting or standing, or shift their weight away from nearby bystanders to avoid accidental contact with or theft of the weapon.

Asymmetry: Another telltale sign is asymmetry in clothing. Guns are heavy and bulky, and thus will betray signs of their presence to anyone who’s paying attention. An outside-the-waistband holster may cause a visible midline bulge, while an ankle holster may cause a bulge or tightening of the fabric at the lower leg. A gun held in a jacket pocket will weight down one side of the jacket unevenly.

Environment: Hot or inclement weather can make concealed weapons easier to spot. Rain, wind, or sweat can reveal the outline of a gun, which will generally be much easier to hide under multiple layers of cold-weather clothing.

Negligence: Weapons are also frequently exposed due to temporary negligence, flashed or inadvertently dropped as a gunman reaches for his wallet. Dropped weapons are an all-too-common scenario at public urinals, where inexperienced perpetrators may thoughtlessly unzip their pants — thereby releasing the tension that was holding up the holster.

The post How to Spot a Concealed Handgun appeared first on The Art of Manliness.

I'm a child of the 50's. libertarian, now medically-retired. I've been a certified firearms trainer, a private investigator, and worked for a major credit card company for almost 22 years. I am a proud NRA Life Member. I am a limited-government, free-market capitalist, who believes in the U.S. Constitution and the Rule of Law.
View all posts by guffaw1952 »
« More On Voter Fraud
Hoplophobia »

5 thoughts on “How To Spot A Concealed Handgun”