Not A Gunsmith, Part Tres’

In our last episode…

I had gone shooting with friends, and marveled at the significantly lighter trigger of my friend’s Smith & Wesson .38 snubbie.

Having carried my electroless nickel S&W 442 for going on 22 years, with the stock 14 pound trigger(!), I thought it might be time for improvement.

SO, I order a Wilson Combat spring kit through Brownell’s (for a whopping $9) and excitedly awaited it’s arrival so I could swap out the springs and share in the love…

I received it in about four days, found my brand X gunsmithing screwdriver, and went to remove the S&W sideplate.  Two screws in, I discovered that screw #3 was NOT loosening!  Not too much of a surprise, as the cheap screwdriver shaft was turning in the handle (!), and I had never had the sideplate off.  Ever.

I own a second (better quality) gunsmithing screwdriver.  However it remains beneath a pile of unpacked boxes.  And between being disabled, having back problems (and just not wanting to) there it remained.

Suggestions were made for screw-loosening oils, but without a decent tool, it wasn’t going to happen…

My roommate said she had a quality gunsmithing screwdriver, and offered it for my use.  I jumped at the chance.  But Life got in the way.  For almost two months.  Sigh.

FINALLY, I had the tool and the time.  And access to the You Tube videos regarding J-Frame Smith smithing.  And I began the task at hand.

That stubborn screw continued to be stubborn – but not impossible.  🙂

The sideplate was finally removed, and with some minor difficulty ( I repeat, I am NOT a gunsmith), the mainspring has been replaced!!

And the trigger pull went from fourteen pounds to a whopping EIGHT!

I’ve not yet replaced the trigger return spring (Wilson give me three from which to choose!) and the instructional videos have instruction regarding stoning certain surfaces to smooth them up.  I’m not certain I’m up for that.  As Inspector Harry Callahan said, “Man’s got to know his limitations.”

FTC – I bought all the screwdriver sets (except my roommate’s), the spring replacement kit and the revolver.  Go and buy your own! 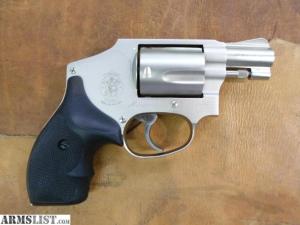 a stock photo. My piece has a little corrosion damage on the sideplate. (that whole nasty sweat issue.)
Unattractive!

I'm a child of the 50's. libertarian, now medically-retired. I've been a certified firearms trainer, a private investigator, and worked for a major credit card company for almost 22 years. I am a proud NRA Life Member. I am a limited-government, free-market capitalist, who believes in the U.S. Constitution and the Rule of Law.
View all posts by guffaw1952 »
« Helen Rawls RIP
Just In Time For Your Pre-Election Festivities… »

6 thoughts on “Not A Gunsmith, Part Tres’”