I wonder if it’s just Soros or SEIU (famous for earlier OWS busings) or LaRaza?  Or a coordinated effort by community organizers (outside agitators) in all these groups?

I was told by a liberal friend that it didn’t happen against Obama, because folks think Trump is more dangerous (!?)  Different strokes, I guess.  I thought Obama was/is plenty dangerous…

As for me, there have been Presidents and policies with whom/which I disagreed over the past 40 years.  But, I couldn’t leave school – I’d have been suspended.  And work?  Fired.

Besides, I had and needed to keep my job!  (I’m guess this IS a job for many of these folks!)

(in part from Free North Carolina)

Figures. Anti-Trump Protesters Were Bussed in to Austin #FakeProtests

Paid fake protesters were bused in to the anti-Trump protests in Austin, Texas.

They must have spent a lot of Soros money on this operation.

There was a whole string of buses.

Everything they do is fake or paid for.

More @ The Gateway Pundit
and… 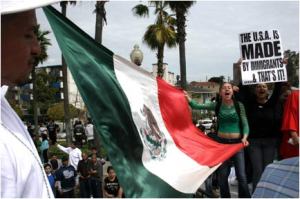 ‘Students’, aka Lenin’s useful idiots.
Funny how they sport MEXICAN flags and professionally-made signs…
The Internet says the epicenter of the protest activity is OREGON! (where Austin, Berkeley, Tucson, SF et al should relocate!)
Who knew?
At least this gives folks something to do.
(BTW – I’m all for protest – it’s a fine American tradition.  Criminal damage, arson, rioting, and assault are crimes, not protest.)
(AND WHILE WE’RE ON THE SUBJECT)
There’s  ‘movement’ to force the Electoral College to change their vote to coincide with the popular vote! (I wonder if such a movement would exist if the result had been reversed?), AND, a movement to amend the Constitution to make the Presidential Election by popular vote!!
Didn’t any of these folks take Eighth Grade Civics?
For those who missed it, The United States is a REPUBLIC, NOT a democracy (aka majority/mob rule).  Please see the map below:

Do you REALLY want only the regions in blue deciding who becomes President?  THIS is why the Electoral College was created.  The Founding Fathers were smart cookies – thinking of fly-over States before the airplane was even invented!
Class dismissed.

I'm a child of the 50's. libertarian, now medically-retired. I've been a certified firearms trainer, a private investigator, and worked for a major credit card company for almost 22 years. I am a proud NRA Life Member. I am a limited-government, free-market capitalist, who believes in the U.S. Constitution and the Rule of Law.
View all posts by guffaw1952 »
« Robert Vaughn RIP
Things That Make One Go “Hmmm”. »