Things That Make One Go “Hmmm”.

(As posted on The Grey Enigma) 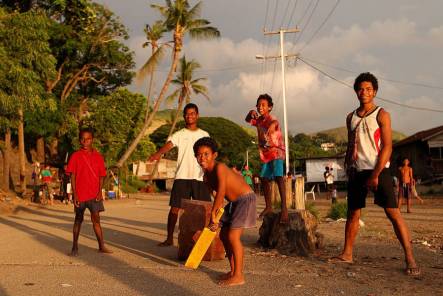 Children from the village of Hanuabada play cricket in the streets on February 24, 2012 in Port Moresby, Papua New Guinea. Most everyone knows that the islands of the South Pacific are some of the most remote and unique places on Earth, but a new study reveals just how unique they really are.According to a report from the University of Texas MD Anderson Cancer Center in Houston, researchers have found traces of a previously unknown extinct hominid species in the DNA of the Melanesians, a group living in an area northeast of Australia that encompasses Papua New Guinea and the surrounding islands.A computer analysis suggests that the unidentified ancestral hominid species found in Melanesian DNA is unlikely to be either Neanderthal or Denisovan, the two known predecessors of humankind to this point.

Source: Some Pacific Islanders Have DNA Not Linked To Any Known Human Ancestor – All That Is Interesting

An addendum to that whole ‘the science is settled’ thing.

We thought we knew about the origins of mankind.

I'm a child of the 50's. libertarian, now medically-retired. I've been a certified firearms trainer, a private investigator, and worked for a major credit card company for almost 22 years. I am a proud NRA Life Member. I am a limited-government, free-market capitalist, who believes in the U.S. Constitution and the Rule of Law.
View all posts by guffaw1952 »
« GEE…
REMEMBER – The MAFIA Doesn’t Exist! »

2 thoughts on “Things That Make One Go “Hmmm”.”