Where To Put Your Stuff In A Suit

Not as many men wear suits as were worn say, in 1956 (The Man in the Grey Flannel Suit).  Times and styles change.

However, between business concerns (excluding casual Fridays), and certain social events (weddings, funerals, etc.), it is sometime appropriate to don one.

(I own exactly that – ONE.  I’d own more, but just don’t have the needs or funds – Guffaw)

As with so many other social skills, I was not taught HOW to wear a suit!  Not how to tie a tie (I was taught that), or polish shoes (I still do that – it relaxes me) but, where does one put stuff, exactly?

The Art of Manliness blog comes again to the rescue! 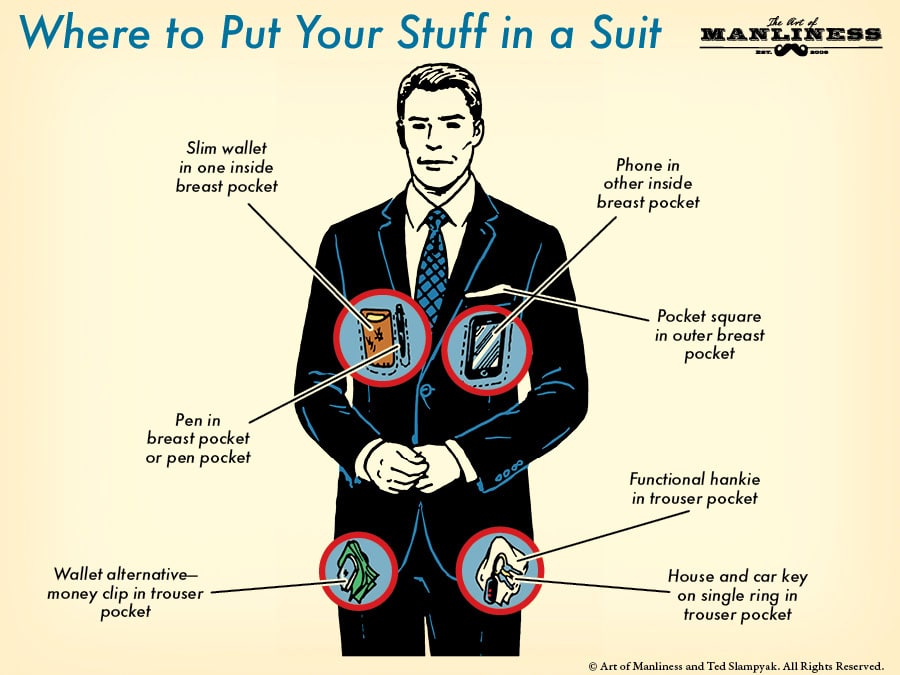 The whole point of wearing a suit is to create a sleek, smooth look for yourself. So you don’t want to ruin that dapper silhouette by stuffing your pockets with too many accouterments, and in such a way that they create unbecoming bulges in your clothing. Hauling around a bunch of stuff not only distorts the proper shape of your suit, but can also distort its fine fabric, putting unnecessary wear and tear on the material.

Instead, when it comes to carrying your formal/professional EDC in a stylish way, the name of the game is minimalism and balance. You want to pare down the things you carry with you, and distribute them evenly throughout your pockets.

Your wallet should be thin and compact, and placed in one of the inside breast pockets of your suit jacket, rather than in the back pocket of your trousers where it will push your jacket out. If you still find a wallet too bulky to carry, then a slim money clip, with just a few bills and a credit card, can fit in the front pocket of your trousers.

A pen can also go in this inside breast pocket, though some suits have a special slit for it to sit.

Your phone can be put in the other inside breast pocket. If you’re doing a money clip in your trouser pocket instead of a wallet in the jacket, then the phone will lack a counterweight up top. But unless your phone is very heavy and large, it’s not likely to unbalance the way the jacket hangs on you.

A big set of jangling keys will create a significant bulge in your trouser pocket, so when you’re wearing a suit, strip down your keychain to just your house key and car key on a single ring. Or always carry all your keys in a device like this one which minimizes their space and noise.

Your other trouser pocket can hold a plain handkerchief (here’s 6 reasons every man should carry one). While a pocket square can sometimes pull double duty as a functional hankie, you usually want a nicer, fancier one for the outside breast pocket on your suit, and a utilitarian one for blowing your nose.

And that, gents, is pretty much all you need to tote around on your person when you’re suited up. Other things like gum or a pocket knife could go in a briefcase or bag if you’re carrying one. Your phone could easily be put away in a bag too; after all, one’s suave appearance cannot only be ruined by carrying around too much bulge-creating stuff, but also by taking out a particular piece of it and checking it every two minutes.

I'm a child of the 50's. libertarian, now medically-retired. I've been a certified firearms trainer, a private investigator, and worked for a major credit card company for almost 22 years. I am a proud NRA Life Member. I am a limited-government, free-market capitalist, who believes in the U.S. Constitution and the Rule of Law.
View all posts by guffaw1952 »
« Where Were YOU When…?
Don’t Let The Door Hit Ya… »

8 thoughts on “Where To Put Your Stuff In A Suit”