Another Night As A Security Guard

I think I was first employed as a private security guard in 1972.  Last, in 1987.  For about six different companies over the years.  Interspersed with being a process server, private investigator, security consultant and numerous other jobs.

Consequently, sometimes my memories conjoin, and sometimes fade.  Sometimes, they make me cry (like restricting access to the urgent care facility to allow access for a seriously ill cancer patient – because the cancer made them stink!), and other times they make me chuckle.

Why haven’t I posted about this funny ever before?  I’d forgotten about it.  A recent course of Nyquil™ helped me to remember!  😛

I was a graveyard shift guard for an urgent care facility three days.  And substitute guard supervisor for two.  Often filling in for sick, ill, and lazy guards.  And those who just decided to quit at the last minute.

(If I couldn’t bribe someone else to fill in…)

One of the offices for the urgent care was adjacent to a popular stage theater/movie house.  And sometimes, the audience parking would bleed over into our lot.  Our job, as security, was to make certain they simply didn’t restrict patient parking.

Usually no issue or biggie.

But this was Phoenix’s Sombrero Playhouse!  Where much of central Phoenix ‘old’ money would go to watch plays, and sometimes first-run films.  Then they’d go up 7th Avenue to The Islands for a nice dinner out.

Generally nice, older folks who didn’t want to be annoyed.  And had money to enforce that.

And, I was a conservative, somewhat sheltered young lad.  Just trying to do my job.

As a last minute aside, I was told there was a new movie at the Sombrero.  And some of the patrons ‘dressed in costume and makeup’ to see the film.  I was not to express alarm at their ‘getup’.

I’d not heard of the film.  It was THE ROCKY HORROR PICTURE SHOW!

So, a guy pulls in and asks me if it’s okay to park in the clinic lot.  I apologize and say no.  The first of many times that evening to people who looked (somewhat) like this: 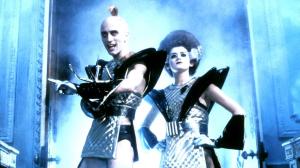 I didn’t express alarm, but did have to stifle laughter!

And my boundaries were again widened.  Not because I wanted them to be, necessarily.

And Rocky Horror became an underground hit.  And took over ‘Midnight Movies’ at my nearby theater, The Valley Art.  The used to run indy films, then it became nothing but Rocky Horror every Friday and Saturday midnight!

Times were a changin’…

I'm a child of the 50's. libertarian, now medically-retired. I've been a certified firearms trainer, a private investigator, and worked for a major credit card company for almost 22 years. I am a proud NRA Life Member. I am a limited-government, free-market capitalist, who believes in the U.S. Constitution and the Rule of Law.
View all posts by guffaw1952 »
« Happy New Year?
Thus Spake Assange »

4 thoughts on “Another Night As A Security Guard”