As posted by Irish…

Nothing To See Here… ISIS on The Texas Border?

sent in by reader Brian:
A Jihadi-cartel alliance in the Mexican state of Nuevo León is collaborating to carry out attacks in American cities and ports of entry along the southern border, according to intelligence obtained by Judicial Watch from confidential U.S. and Mexican law enforcement sources. As part of the plan, militant Islamists have arrived recently at the Monterrey International Airport situated in Apodaca, Nuevo León, about 130 miles south of the Texas border. An internal Mexican law enforcement report obtained by Judicial Watch confirms that Islamic terrorists have “people along the border, principally in Tijuana, Chihuahua, Coahuila, Nuevo León and Tamaulipas.” Cartel informants tell law enforcement contacts that “they are only waiting for the order and the times to carry out a simultaneous attack in the different ports of entry or cities of the United States of America.” Drug cartels have a working “agreement” with Islamic terrorists, according to a high-ranking Mexican police administrator, who said that men from the Middle East arrive regularly into the country to “train” jihadists.

So…we’re debating if a former single National Guardsman shooter is ISIS influenced?  Or brainwashed?  All-the-while ignoring stories like THIS!
WAIT!  LOOK OVER HERE!  PAY NO ATTENTION TO THAT OTHER STUFF!
MAROONS! 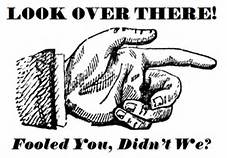 I'm a child of the 50's. libertarian, now medically-retired. I've been a certified firearms trainer, a private investigator, and worked for a major credit card company for almost 22 years. I am a proud NRA Life Member. I am a limited-government, free-market capitalist, who believes in the U.S. Constitution and the Rule of Law.
View all posts by guffaw1952 »
« At The Movies
Remember ‘Green’ Army Men? »