So, There Was A Protest

Or rather a series of protests across the country (and the World), following the Presidential inauguration.  Reportedly in significant numbers.

What exactly was being protested, and by whom?

It appeared to be largely women.  Protesting Donald Trump’s history of misogyny.  Because of a locker-room style comment he made eleven years ago.  Some protesters showed class, by dressing like this:

To be fair, not everyone was dressed this way.

I did notice most of the ‘notables’ involved in the protests were ‘left of center’, demanding continued funding for Planned Parenthood (as an example), and more government funding for all their concerns (like free health care for all), and consisted of folks like (from this AP report):

(…) Pop diva Madonna made an unannounced appearance Saturday in Washington, joining hundreds of thousands of protesters who rallied for women’s rights in defiance of Trump.

I did notice conservative women were absent – perhaps discouraged from appearing?

Part of the protest was regarding protection of the environment.  Here is one photo following a protest: 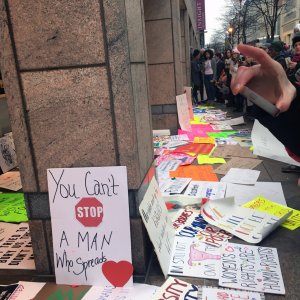 I’m certain more government money/labor will be needed to clean up after the protesters.

But, going to the government teat seems to be their fallback.  Wait!  Can I say that?  Great – I’ll probably have women dressed as boobies outside my door, now…

Naw, I’m not as important at The President.  🙂

(You all know I support legal protest – it’s a fine American tradition.  I didn’t see any reports of violence or criminal damage.  Good for you, ladies – and Michael Moore.)

I'm a child of the 50's. libertarian, now medically-retired. I've been a certified firearms trainer, a private investigator, and worked for a major credit card company for almost 22 years. I am a proud NRA Life Member. I am a limited-government, free-market capitalist, who believes in the U.S. Constitution and the Rule of Law.
View all posts by guffaw1952 »
« It’s The SIG Sauer P320!
The Twelve Labors Of Hercules  »

4 thoughts on “So, There Was A Protest”