The Twelve Labors Of Hercules

With my knee being ‘iffy’, and The Horrible Chair, just going downstairs can be a challenge.

And, when my roommate having breathing difficulties and sometimes staying in bed, it’s up to me to be  (as my Father would label himself) the chief cook and bottle washer!

That is, take care of the livestock and fetch medicines, water, soda and food for the ‘infirmed’.

I’ve no complaint about so doing – after all, it was my roommate who saved me from possibly having to live on the street with my income decreased and I lost my home.

The ‘problem’ (and this is a joke, folks) is the livestock in question sometimes makes it difficult to do chores.  Because, they, too, want attention.

Or just to be in the way!

The first hurdle is (are?) the stairs.  I know, not livestock.  But just going down them can be painful.  And sometimes the kitten (Belle) plays the ‘can I trip him on the stairs’ game.  (Does this count as a second hurdle?) 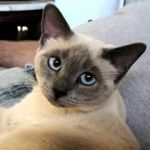 Hurdle Two – the Cage.  (In no way resembling Star Trek-TOS episode!)  We have taken to giving the livestock the run of the downstairs.  We used to pen up the older dogs in the downstairs bath-as a makeshift kennel.  And that worked for many years.  But, as they have aged (both 16 now), their hearing and vision has diminished.  And D.J., especially, gets scared in the dark when he cannot move about freely.  This wouldn’t be a problem, except he starts barking.  One yelp every eight seconds or so.  ALL NIGHT.  Or until he finally falls asleep.  The yelping resumes when he awakens – even at 0300!  Letting them go free gives them enough ambient light to patrol the downstairs and see enough not to bark.

Unless, of course, a stray cat appears in the back yard.  No plan is perfect.

(Back to the cage)  We have a ‘cage’ kennel we have used for Lola (the puppy-now two, but forever nicknamed as such) which also is just the right size to block the dogs from going upstairs.  They are supposed to use the designated paper by the back door, but sometimes they like to sneak to the upper landing.  And we don’t like that.

SO, I’ve descended the stairs, and prepare to move The Cage out-of-the-way, when Gracie becomes involved.  She likes to sit on top of said cage and add an addition three or four metric tons to it’s weight.  HER nickname is BAC – for Big Ass Cat!  Plus, she can be kinda snotty if asked to move and might hiss at you! 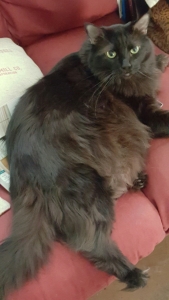 Now that we’ve made it down the stairs, and moved the cage, there’s the kitten, again.  No, she’s not gone away.  If I walk past The Horrible Chair, she will jump up on the seat and demand tribute!  Which means flopping over and belly rubs!  (the cat, not me)  I must admit this is not much of a trial, and rubbing the belly of a purring kitten is quite pleasant.  😛 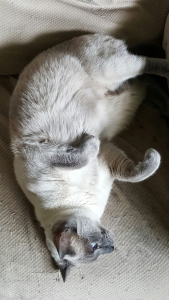 She can continue with an additional trial, following me incessantly and meowing tiny mews, until I either fill up the water, the food, or change the cat box.  She always lets me know.  But every time I walk by The Horrible Chair I must pay!  🙂

Okay, okay!  I know.  Animals are a blessing, and three (or four) interactions with them first thing in the morning is great! (Except for the B.A.C.!)

And four is not twelve.  Perhaps I need to rethink this.  But The Three or Four Challenges of Hercules just doesn’t have the same ring to it.  😛

I'm a child of the 50's. libertarian, now medically-retired. I've been a certified firearms trainer, a private investigator, and worked for a major credit card company for almost 22 years. I am a proud NRA Life Member. I am a limited-government, free-market capitalist, who believes in the U.S. Constitution and the Rule of Law.
View all posts by guffaw1952 »
« So, There Was A Protest
The Maxims of General George S. Patton »

5 thoughts on “The Twelve Labors Of Hercules ”