POTD: Watch Your Hands When You Unload And Show Clear

POTD: Watch Your Hands When You Unload And Show Clear 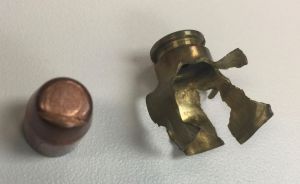 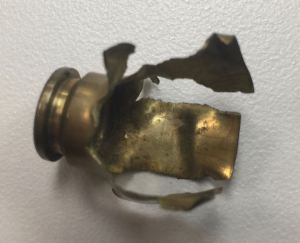 A shooter was unloading his handgun when this happened. From what Scott relayed to me, was that the shooter cups the ejection port to catch the round to save time from picking it up off the floor. Now to clarify, this was not a malfunction. It was not a FTF and the primer was never struck. What happened was that during the unloading process the shooter’s hand covers the ejection port. The round most likely ejected into the hand but since the hand was so close to the ejection port it got caught between the slide and barrel.

Take a look at the picture below. You can see the primer lacks any hammer mark. However there is a clear crease from the edge of the slide cutting into the headstamp of the casing. If you look at the photo at the very top, you can see the bullet has a vertical line cut into it as well.

By cupping the round as it ejected out and it getting caught on the slide as the slide tried to close, the round went off in the shooter’s hand.

Here is what Scott relayed to me:

The following is a story relayed to me. I do not have first hand knowledge of this, but I do trust the source.

There is a noticeable linear denting on the nose of the projectile and an obvious strike point on the rear of the case and the primer. The projectile could not escape and the resulting effect was for the case to burst. The pressure from the burning propellent was absorbed by the shooter’s hand. He will not be able to make this mistake again.

It is a sobering lesson for many shooters. No one ever really believes that this could happen to them.

I have seen some people use this technique in USPSA. I have seen people eject the round and catch it in the air as well. Be careful and pay attention. The scenario above could be considered a sheer accident. However if the shooter did not use that ejection method then there is less likely of a chance such an event would have occurred.

I have used this technique on occasion.  Usually not (thankfully).  When it comes to safety, I think being safe is preferable to looking cool.

Interestingly, there is no picture of the shooter’s hand…

I'm a child of the 50's. libertarian, now medically-retired. I've been a certified firearms trainer, a private investigator, and worked for a major credit card company for almost 22 years. I am a proud NRA Life Member. I am a limited-government, free-market capitalist, who believes in the U.S. Constitution and the Rule of Law.
View all posts by guffaw1952 »
« ASM826 and Borepatch Bring Bayou Renaissance Man’s Take On The Trump Wiretap
A Sniper Snubbie? The 50-Yard Accurate Kimber K6s DCR .357 Mag. – Full Review. »

6 thoughts on “POTD: Watch Your Hands When You Unload And Show Clear”