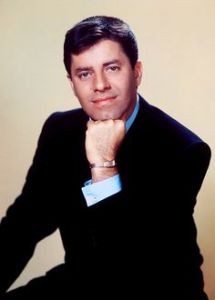 By now, most of you have probably heard.

Like so many comedians/comic actors he had amazing range and talent.  Some Hollywood types are a one-trick pony.  Jerry certainly wasn’t.  Have you seen King of Comedy?

After his split from straight man Dean Martin, it was publicly asked, “What’s Dean going to do?”  😛

My lovely sister was in one of his movies.  The Nutty Professor (the original in 1961) filmed exteriors on Arizona State University campus.  My sister was one of the extras!  Unfortunately, her scenes were cut!  She still adored the man.

Then, there was his long commitment to the Muscular Dystrophy charity.  How giving was this man?

I’ll leave you with this.  When I heard he had passed, I imagined him just like this, sneaking into the Supreme Being’s conference room and pantomiming again, to Count Basie…

I'm a child of the 50's. libertarian, now medically-retired. I've been a certified firearms trainer, a private investigator, and worked for a major credit card company for almost 22 years. I am a proud NRA Life Member. I am a limited-government, free-market capitalist, who believes in the U.S. Constitution and the Rule of Law.
View all posts by guffaw1952 »
« Democrat Introduces Articles of Impeachment Against Trump for Charlottesville Response
Well, Here We Are AGAIN… »