Herein resides one of three dogs.  The only male.  Sixteen years old  Uneutered.  And he’s mostly quite and gentle.  He spends his time sleeping, and between naps and chasing the female puppy around.  Who has been spayed.

But there’s a problem.  He’s never been ‘trained’ to go outside, or use the paper.  We got him as a rescue.  He will make a valiant effort, though.

The problem is he’s now largely deaf and blind.

Actually, that’s not the problem.

THE problem is someone needs to change the used dydee.  And my roommate is recovering from her second shoulder surgery.  And I have arthritis and a fused right hip.  Who would think chasing (and catching) around a 16 year old chi-hooa-hooa would be difficult?

Take my word for it, it is.

But you said “he is largely deal and blind”?

Remember the Jurassic Park lesson of Dr. Alan Grant about the Tyrannosaurus Rex?

… during the “main road attack” he tells Lex to stay still because
“[the tyrannosaur’s] vision’s based on movement.”

I try to sneak up on him when he’s asleep.  Failing that, when he’s not looking at me.  If he see’s me, the chase is on!

The other day (in the hallway) I was advancing from the rear, when he turned his head.  I froze, until he turned away again, then pounced!  He squealed and barked for a second, then I carted him to a secure surface to change the wet for the dry.

After much squealing and thrashing – SUCCESS! 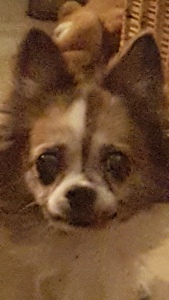 Dr. Grant, we salute you!

I'm a child of the 50's. libertarian, now medically-retired. I've been a certified firearms trainer, a private investigator, and worked for a major credit card company for almost 22 years. I am a proud NRA Life Member. I am a limited-government, free-market capitalist, who believes in the U.S. Constitution and the Rule of Law.
View all posts by guffaw1952 »
« It’s That Day Again
What State Law? »