This tag is associated with 24 posts

In Need Of A Guffaw…

March, being a normally sucky month, coupled with financial tightness brought about by my roomie being off work due to having had surgery, I feel the need…

The need for GUFFAWS!

After all, this blog is entitled Guffaw in AZ !

from the desk of GUFFAW

Back in 2011, I had been laid off from TMCCC, disabled due to having had lymphoma, and had been spending a large part of my day reading blogs on the Internet.

No, this was NOT in my mother’s basement!  😛

Frankly, as I had found a number of women who were shooters who wrote blogs (they became my Blogmothers ™!), I had hoped to find someone closer to home.  Unfortunately, they were in Indiana, Ohio and Idaho.

But, I had no luck in the geography department…  😦

After a year-and-a-half, it occurred to me, ‘Hey, I could do this!’ (or, at least mimic others, and steal their material…)

And Guffaw in AZ was born.

With no real purpose, except to have something to do, and a daily discipline.

And the completely unexpected happened.

Friends all over the World!  Europe, Asia, the Middle East, Pakistan and India, South America.  Mostly, of course, in the United States.

A huge thank you goes out to the generosity of people I only know through the Internet, who have offered me support, both moral and financial.  And given me gifts!  You know who you are…

I miss those who are no longer blogging, by choice or life circumstance – North, Matt, Maura, CoolChange, William the Coroner and many others.  (If I’ve left you off the list and you are still around, please forgive me).

And especially Murphy, Brigid, ASM826 and Borepatch!  And Judy, my roomie!

And my dear friend Dave the genius (who prefers to be called Dave the mechanic) who sends me multiple funnies daily to possibly include in the blog!  And who – when he is in town – takes me out for Red Devil pizza!  And who has been a loyal friend since 1973.

And to all you loyal folks who don’t blog or even leave comments but bother to stop by – THANK YOU!

PS – (Why Tamara is in red, above) Apologies to the lovely and talented Tamara, who somehow was left off my gratitude list last year!  A correction has been made, and I plan on penance by shooting myself in the knee with a VeloDog, as soon as I can afford one!

PPS – TMCCC  (for the uninitiated) stands for That Major Credit Card Company, where I worked as a credit card fraud investigator for almost 22 years.

And, we’ve not guffawed in a while…

I’ve an addictive personality.  I come by this honestly, as both my parents were also afflicted.  It killed them both.

Before you get all worried, I’m not addicted to tobacco, as my Mother was.  My Father liked his cigars and his alcohol.

And his excess food.

The S.A.D. (Standard American Diet) – too many refined carbs, too much protein, too much white sugar.

I, too, like food.  Sometimes to excess.  Including sugar.

The Good Rev. Paul posted recently regarding Krispy Kreme Donuts.  Now, I LOVES me a good doughnut!  The problem is unlike normal folks, stopping at one, for me, can be difficult.  And here in college/commuter town USA, we are surrounded by doughnut shops!  The ubiquitous Dunkin’, Krispy Kreme, and many local emporia.

SO…I must make the choice.  And sometimes I partake.

Fortunately, it’s not too often, and not a dozen-at-a-time.

I’m reminded of a cartoon, long ago in Playboy.  (Buck Brown?  Gahan Wilson?  Which I was unable to locate it on the ‘Net)

An older couple in their rocking chairs, on their front porch.  Both are quite obese.  And they are chowing-down.  Between them is a large bucket of fried chicken.  Just visible, to the side of the house, is a square, striped building(!?)

And one says to the other, “Sometimes, I wish they hadn’t moved in next door…”

Today, give me strength.

The post-it-note says “Suck it up, pussies!” Whoever wrote it also drew a winking, tongue-out smiley face…

Students had been invited to express their feelings about the election by writing them on post-it-notes and placing them on a designated table. The post-it-note in question appeared in the window of the Office of Student Diversity and Inclusion instead, according to Campus Reform.

College Vice President Tony Chambers sent a letter to campus condemning this “act of cowardly hatred” and “intimidation.” He wrote:

That’s hate for you, I guess.

Ye Gods and little fishes . . . hysterical over-reaction, anyone?  I wonder what they’d do with a real hate note?

“the Office of Student Diversity and Inclusion”

I think that says it all.  Someone’s college money is going to pay for said office.

I’m not a believer in ‘hate speech’.  There’s speech.  It may be colorful, laudatory, or vile.  But so-called Freedom of Speech supports it.  It’s protected.

Waa!  He called us a name and drew an inoffensive cartoon is protected.

GROW UP!  You’re in college now.

An Absence Of Guffaws

I’ve not posted any ‘funnies’ in a while.  Probably because things aren’t particularly funny.

Having said THAT, here’s something(s) you might find amusing:

Hope these brightened your day!  –  Guffaw

Even ONE of these heroes making this choice is unacceptable! (Day #8 of 22)

Constantinople (Greek: Κωνσταντινούπολις, Κωνσταντινούπολη – Konstantinoúpolis, Konstantinoúpoli; Latin: Constantinopolis; Armenian: Կոստանդնուպոլիս, Kostandnupolis; Ottoman Turkish: قسطنطینیه, Kostantiniyye; and modern Turkish: İstanbul) was the capital city of the Eastern Roman or Byzantine Empire, the Latin and the Ottoman Empire. It was founded in AD 330, at ancient Byzantium as the new capital of the Roman Empire by Constantine the Great, after whom it was named. In the 12th century,[1]the city was the largest and wealthiest European city.[2]

Eventually the empire of Christian Eastern Orthodoxy in the east was reduced to just the capital and its environs, falling to the Ottomans in the historic battle of 1453. (The Free Dictionary)

This showed up the other day in my daily read of Ref Desk.

The city now known as Istanbul was founded as the Greek colony of Byzantium in the 8th century BCE. Eventually passing to Alexander the Great, it became a free city under the Romans in the 1st century CE. Emperor Constantine I made the city the seat of the Eastern Roman Empire in 330, later naming it Constantinople. It remained the capital of the subsequent Byzantine Empire after the fall of Rome in the late 5th century and then changed hands several times. Why was it renamed Istanbul in 1830? More…

Of course, my mind, working as it does, went to this…

Because I’m in need of a guffaw!

I’m Here With The SKINNY

Today’s award goes to all the politically correct students and staff at Bowdoin College in Maine.

Some students wore sombreros to a tequila-themed birthday party at Bowdoin College — and others were so offended that the school had to provide them with safe spaces and counseling to deal with it.

This phrasing was, presumably, aiming to poke fun at the way the PC police often lose their minds over pretty much any party where tequila is present — which wound up being exactly what happened with this one.

Yep. According to the Orient, one student (1) reported that some of the attendees had been wearing sombreros at the same time as they were drinking tequila at the party, and all hell broke loose.

In an e-mail to National Review Online, sophomore Richard Arms states that there have been “3 school-wide emails from deans and our president, and there have been several ‘safe-space’ opportunities on campus for students to discuss how they were hurt and offended” by the party.
. . .

Yes — safe spaces for people who have been hurt by the very existence of tequila parties and punishment for the people responsible for them.

I’m not for outright hatred of either the participants, nor those offended, but SERIOUSLY?
Should we revert to the days of minstrel shows with White folk in Black face eating watermelon, or Speedy Gonzales cartoons with mice in sombreros with stereotypical accents (all performed by a Jewish guy) winning against the cat? (Even though they always WON?)
Probably not.
HOWEVER, should we be so offended by drunken college hi-jinks more about tequila than being stereotypically Mexican?
Was anyone maimed or killed?
Were those in sombreros summarily sent back across a symbolic border without due process?
SKIN – White, Brown, Black, Yellow, or some variant or combination NEEDS TO BE THICKER!
I’ve been seriously rail thin – skinny – in my lifetime (140 pounds), and also obese.  Just over six foot and 350 pounds!  And have been physically disabled since age 12.
You think I’ve not been called skinny, fatty, crippled, Forrest Gump, a ‘fat f**k’ and a number of other unkind things.  Sure, it hurt at the time, but I know myself and my character have atoned for my mistakes and moved on.
And I never needed a ‘safe space’ to discuss how these epithets affected my life!
What’s going to happen when these bubble-wrapped snowflakes enter the real world?  (I’m thinking a melt down.)
I’ve a dear friend who is less than average height.  I’m disabled.  On occasion, we’ve been known to address one another as shorty and gimpy.  No harm or disrespect meant.
SKIN.  THICKER.
I’m tellin’ ya.
PS – Who PAYS for these ‘safe spaces’?

‘Tis The Season To Guffaw!

I’ve been posting much about the constant encroachment of BIGGOV, and it’s depressing me… 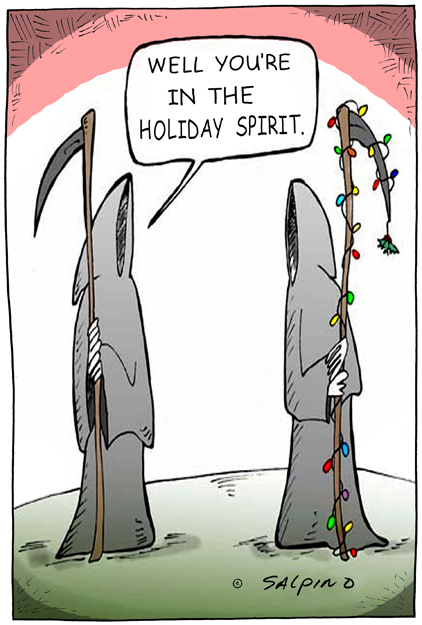