This tag is associated with 48 posts

Most of you know this is a bad time of year for me.

I’ve not happily celebrated this holiday for years.  I remember prepping my daughter on Friday for school, making certain she had something green on.

But, I saw a cartoon on FB recently, that made me chuckle. Guess that means I am healing (?)

Today is St. Patrick’s Day, on a Friday, just as it was 22 years ago.  Most Fridays (in recent memory) I wear a red shirt, as I am a member of the Red Shirt Society.  (NO, not the Italian militia, Southern white supremacist group, or an expendable Star Trek guy!)

It would be awesome if everyone wore RED Shirts every Friday in honor of our military who are deployed. WE as American citizen’s need to keep our Veterans and Military close to our heart and in our prayers.

But today, in deference to my celebrating the holiday for the first time in 22 years, I am wearing the GREEN!  (Orangemen, of course, are acceptable, too – this IS The United States!)  🙂

Say, didn’t we do this just a year ago, and the year before that?

Seriously, best wishes for a Happy New Year to my family, my friends, my FB friends and especially my Internet and blog friends!

Most years fail to meet expectations at some point, but 2016 (for me, anyway) was particularly bad.

(There is no need to account for the negative items here.)

It does say something about the human condition, for all the pessimism, depression, war, disease, man’s-inhumanity-to-man, that EVERY YEAR we return to this ritual of celebrating the onset of a new year with positive hope for the future.

What other choice is there?

To all my friends and family near and far.

And, to all my Jewish friends,

And to my ‘other’ friends,

And Best Wishes for a Safe and Healthy return for those in service to this Great Republic!

And to everyone, regardless,

PEACE ON EARTH, GOOD WILL TO MEN

Okay, for anyone who cooks, not a secret at all!

I don’t cook as often as I used to.  This is because a combination of neuropathic foot pain and the lesser availability of funds for quality ingredients.   In short, standing for any length of time is painful, and I can’t afford the fine ingredients I would like.  Yes, I’m a kitchen snob.

Also, my roommate gets cabin fever and likes to go out – even if it’s for ‘cheap fast food’.  So, there’s that.

I recently posted my standard recipe for Garlic Goldfish.  A staple in my Christmas household for over 30 years.  I used to use Lea & Perrins Worcestershire Sauce™ initially, because many times it was the only brand available.  And certainly the most famous.

But, in recent years, with my income having been cut (going on disability), I felt the need to cheapen the recipe.  After all Worcestershire is Worcestershire, right?

The past few years, I used whatever was on sale, sometimes a ‘name brand’ in condiments, like French’s™, other times Ralph’s Brand (my nom-de-brand for a generic product).

And I found the Goldfish have suffered for it.  They just didn’t taste the same.

SO, after making an initial small batch using French’s this year, I bit-the-bullet and spent the extra .75 and went back to Lea & Perrins™.

Now I can visit my Sister this Christmas Eve with confidence.

Accompanied by quality Goldfish, and my ex-wife (it’s a long story).  🙂

FTC – neither Lea & Perrins, French’s, Ralph’s Brand or Pepperidge Farm Goldfish Crackers gave me anything!  Go make your own!

The Garlic Goldfish Have Returned! 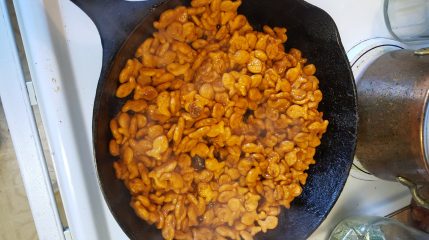 The Garlic Goldfish (a perennial favorite Christmas snack) have arrived!

Actually, they were assembled by yours truly, in a couple hours standing at the iron skillet, Worcestershire, Blue Bonnet margarine and garlic powder at-the-ready.  Then slow baked until dry and toasty.

(For the uninitiated, this is a snack I’ve made traditionally for years.  Originally, I made standard Chex Mix, with the requisite addition of peanuts, pretzels and the like.  With a tablespoon of this, a dash of that.  I determined two things – people singled out the Pepperidge Farm Goldfish Crackers for consumption so the other ingredients were wasted, and screw this tablespoon-dash thing!)

I cover roughly 9/10 of the bottom of the skillet with Worcestershire, add 1/2 a stick of margarine, and sprinkle garlic powder generously.  Then marinate a pan full of crackers until they soak it all up, over medium heat.  Transfer all to a turkey roasting pan and bake @ 300° or so, turning every 10 minutes of so to check for burning, until they are all dry and crispy.  (I use Blue Bonnet because it’s cheap and takes the high heat.)

I used to make these in massive quantities for Christmas when I was employed and bring them into work.  It became such a tradition that folks would start asking me in September if I was bringing in goldfish that year!
🙂

Consumer Warning – they are QUITE addictive and go great with beer!  People consuming these snacks needn’t be concerned they will be molested by vampires, or members of the opposite sex. (Unless they, too, have partaken of the garlicky treats!)

FTC – neither Blue Bonnet, French’s Worcestershire, Pepperidge Farm Crackers or anyone else gave me anything!  I bought and assembled it all myself.  Go make your own – and Merry Christmas!

Yeah, it’s been awhile between guffaws.  With (ongoing) government corruption, terrorism and voter fraud, there’s not much to laugh about…

HOWEVER, my go-to in times of stress is humor.  So, without further ado: 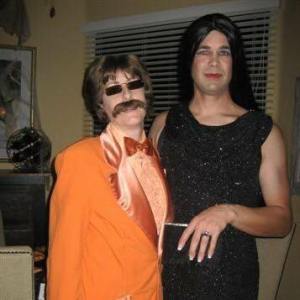 My niece and her husband as Sonny and Cher, during some Halloween!

And, in case you forgot…

Nothing more need be said.

Except perhaps a silent prayer of thanks.

Knives Of My Youth

There were a couple, or three.

The first I owned because of my Father’s disconnect.

He was raised on the East Coast, in a more poor part of town, by a railroad policeman/former Marine.  An Irish neighborhood.

In my mind, his youth resembled a Dead-End Kids movie, except not in NYC.

And, laws aside, there were knives and guns around.  And his Dad’s rules about them – were something akin to ‘touch anything without permission and you get a beating’!

Fast-forward to 1960s Arizona.  A desert, agricultural college town.  Lots of farm and ranch kids.  About 3/4 or whom carried some kind of folder with them.  Girls included.

We had a couple guns at home, which I was not allowed to touch (see above).

One day, while I was in grade school, my Dad came into the back yard where I was playing.  And he handed me a folding knife.  I was going to be leaving for camp in the Summer, and he thought I should have one of his (!)

AND, not unlike The Dead End Kids, he gave me a quick lesson in Mumbley-Peg with it!  Not understanding knives didn’t stick well in the dry, desert dirt.  See, disconnect.

None of my friends had ever seen such a game.  And, anyway, they didn’t bring their knives out at school.

And, I took the knife to camp, a fellow camper borrowed it, cut himself, got taken to the ER(!), and I never saw it again!  He was okay, though.

Fast forward to a year or so later.  I’d made friends with a couple of kids a block over, including a little

red headed girl (!)  (Puberty had yet to hit, and, anyway, she was younger than me and a friend’s sister…I wonder where she is now? STOP THAT!)

My birthday came around, and surprise-surprise, the little red haired girl stopped by with a present!  (Hell, most of my friends hadn’t given me anything!)

And what do you think it was…?

NO, not a folding knife.

A sheathed belt knife!  How cool was THAT?  Of course, my Dad immediately glommed onto it for his camping and fishing trips.

And it resided in the truck’s over-the-cab camper for years.  Until my Dad passed and everything was given away or sold.  😦

Now, my maternal grandfather (aka ‘Gramp’) always carried a knife!  When I was a kid, I thought this was a disconnect, as he was an East Coast banker-type.  The only time we ever say it was when there were presents.

Used to open the boxes!  A Christy gentleman’s knife!

Although, if I really wanted one, Christy still makes them!

FTC – no companies gave me any of these knives for commercial endorsement – now go away!

As Don Benjamin (my high school English Lit. teacher) used to say when he’d (intentionally) run out his lesson plan:

My roommate did a fine job on the tree (which she also bargain purchased – it’s artificial!).  Sadly, neither one of us has enough money to do the holiday up right.

And she’s visiting her daughter in Tucson, today.

I visited my Sister’s for Christmas Eve festivities – here is a pic of nieces, nephews, grand nieces and grand nephews and my sister sporting their silly socks!  🙂  ♫You put your left foot in…♫ 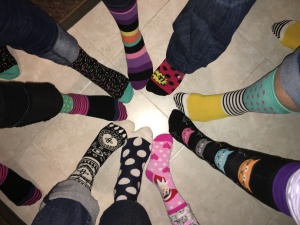 I’ve the critters to keep me company today, and a traditional dinner of Italian food later for which to look.

Santa didn’t bring me the woman I asked for!  Nor the guns!

But, I’ve a roof over my head, a 16-year-old car that sometimes works and fuzzy creatures to annoy, confound and entertain me.

And food for my belly.

Life is good – to all my friends, near and far,  MERRY CHRISTMAS!

When my marriage was winding down, my wife and I separated.  And we eventually got divorced.

It’s only by the grace of God we remained friends.  (And remain so to this day! 🙂 )

The separation was longer than most.  Eight years.  But, we lived apart, shared custody of Molly, equally (alternate weeks, with one alternate day in the middle.)  And living a little more than a mile apart, it ‘worked’.

But, initially, when she told me she wanted to separate, pain aside, it occurred to me that I wanted to do something extra special at Christmas for our daughter.

And I found these art pieces of little girls interacting in their world, by Frances Hook.

And determined I could probably afford one each holiday season, as a special gift to Molly.

Sometimes, getting funds together for toys, clothes and such was difficult.  And the statuettes were an additional hardship.

And she seemed to appreciate them, even when the tradition began, when she was age 5. 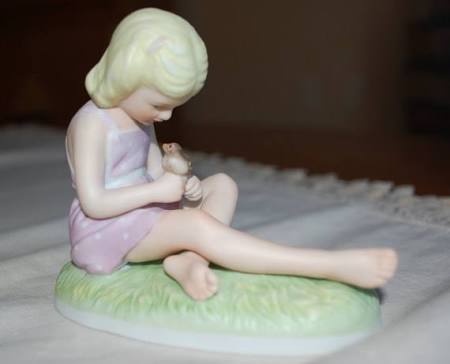 The first one was entitled “Birdie”.  I got it because I remembered her chasing sparrows in the park, trying to get one to light on her finger.   Calling out “Birdie, birdie!”

And so it was to pass she received a different one each year for Christmas.  It was nice as we all continued to share Christmases together.

But, Christmas 1994 found me having difficulty finding another Frances Hook porcelain statuette with a little girl in it that she didn’t already have.  Eventually, I did find one, though.

And I found out the reason for the dearth of sculptures.  It seemed, the artist had passed away the year Molly was born – 1983.  And in 1994, the porcelain figurines stopped production.

We lost Molly the next March.

I wonder if somehow The Universe had made the connection.