This tag is associated with 26 posts

Quote of the YEAR!

Yes, more people are killed by cows each year than lawful guns intentionally fired by a non criminal. Even more than sharks (though I’d avoid if swimming in the Pacific wearing your wasabi wet suit).

My dear friend Brigid wins the Internets with this one!  And all the more serious (and sometimes less so) appending text.

I’m not big on insulting my readership, however, if you are not reading Brigid regularly (and own a copy (or more) of her Barkley book – see the sidebar) THEN YOU ARE AN IDIOT!

She is thoughtful, and well-versed in the manner of educated prose.  And poetry!  And turns-of-phrase. (see above).

And, she’s a redhead!

(as purloined from Random Nuclear Strikes…)

While writing about the NYT tale of how “Assault Weapon” is a term made to scare white folks, Surber refuses to hold the tough questions back.

Instead of going after the gangs, Urban Democrats go after the law-abiding citizenry, unconstitutionally banning handguns and the like until the Supreme Court’s Heller decision reversed that.

The answer is: Only if will help them get votes.

(Guffaw says) To be fair, every time this game has been played in a major metropolitan area in The United States (over the past 70 years) it hasn’t always been Democrats.  But it’s always been Progressives of some ilk.  And how have such policies worked in places like Chicago, New York and Los Angeles?

I’m not even expanding to discussing economies in such places as Detroit.

That’s for another blog.

Not really.  But close!

WordPress software informed me yesterday that I now have 300 (three hundred) followers of Guffaw in AZ!

This means three hundred folks actually pretend to want to read stuff I have written (or have borrowed).   This is a far cry from the initial 10 (#10 being North, the first follower unknown to me from the Internet only) since I began blogging March 6, 2011.

I do recognize some of the number are folks who play Facebook games, ‘friending’ me that I might friend them back.  But, it’s been a few years since I was in junior high.  Hopefully, they actually read the blog, regardless.

Of course, I am still surprised ANYONE does.

This whole blogging thing continues to be amazing.  I’ve had commentary and/or email from folks in the Americas, Europe, Asia, including a woman blogger in Pakistan!

And service personnel everywhere!  Thank you and all veterans for your service!

And thank you all for stopping by.

How do I (Guffaw) feel about immigration?  Fine.  Great.  Come here for the American Dream!  But assimilate, dammit!  Do as my great-great-(great) grandparents did, coming from Germany and Ireland.  Come here to become AMERICANS!

But do it legally!

We shouldn’t be heartless.  But we shouldn’t have to pay for all medical care, public schools, college, housing, welfare, job training, food stamps, ad infinitum – ad nauseum for illegal aliens and their children, and provide them with free education through college.  It’s said many are hard working folk who send much of their money back to families in their home country.  We cannot afford to pay for our own poor!  We shouldn’t be subsidizing others off shore.  We already pay more in foreign aid than any other nation.

There must be limits.

Why the big push to force a path to citizenship?  Statistically, it’s been shown that the vast majority of illegal aliens vote for one particular political party.  (Yeah, I know, they shouldn’t be allowed to vote – but proof pf citizenship or I.D. isn’t required in many areas!)

We should have an enforced border.  AND, stop this drug war nonsense.

So, WHO Are The MURDERERS?

Firehand shares that information with us…

of people with particular connections.
No, our new focus isn’t on neighborhoods like Alton Park or East Chattanooga but instead on “hot” places” and “hot” people. In an article entitled, “The Story Behind the Nation’s Falling Body Count,” Kennedy writes, “Research on hot spots shows violence to be concentrated in ‘micro’ places, rather than ‘dangerous neighborhoods,’ as the popular idea goes. Blocks, corners, and buildings representing just five or six percent of an entire city will drive half of its serious crime.”

The same is true about people. “We now know that homicide and gun violence are overwhelmingly concentrated among serious offenders operating in groups: gangs, drug crews, and the like representing under half of one percent of a city’s population who commit half to three-quarters of all murders.”
…
Kennedy writes, “We also know some reliable predictors of risk: individuals who have a history of violence or a close connection with prior victims are far more likely to be involved in violence themselves. Hot groups and people are so hot that when their offending is statistically abstracted, their neighborhoods cease to be dangerous. Their communities aren’t dangerous; (these criminals) are.”
What’ve we been saying for years?  ‘Stop worrying about objects and worry about the people who commit the crimes.’  Which seems to cover it nicely.  Will the hoplophobes and bigots listen?  Mostly no.

And the people who commit crimes with guns are a very small minority of those possessing them.

The Whited Sepulchre often brings us tables of a statistical nature, but unlike dry statistics, they are oft nourished with the cream of truth!  To wit…

How freakin’ huge is your share of what Obama is spending?  If you’re a smart person and not even bothering to work any more, your share of the government’s fifty-year spending spree is only around $50,000.00.  If you’re one of the dwindling number of net taxpayers, your share is around $100,000.00.

Would you like to turn back the clock and make a few changes in this?  (BTW, the debt is now close to 17 trillion.  Remember the good old days shown here, when it was only 10 trillion?)

Let’s move on.  would you like to earn a dollar and be able to keep the dollar for longer than a few minutes without it losing value?

The Federal Reserve was given the job of stabilizing the money supply way back in 1913.  Here’s what has happened to the value of a dollar (as determined by the money supply) since 1971.  The red line represents the inflation rate – AKA the increase money supply.

Want to invent a time machine, turn back the clock, and for the sake of everyone on a fixed income tell Tricky Dicky Nixon  to leave us on the gold standard?

Let’s move on to Nixon’s dirty little War On Drugs, and what it’s done to the incarceration rate.  (BTW, a white woman has a one in 111 chance of going to jail at some point in her life.  But for a black dude, it’s a one in 3 chance.) 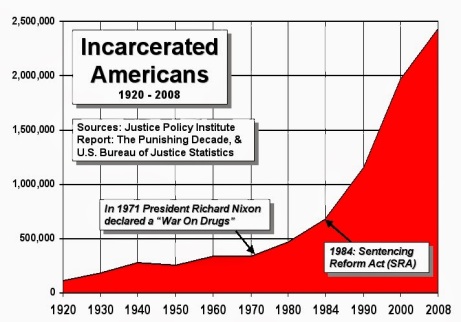 YOU SHOULD VISIT THE LINK FOR THE WHOLE ARTICLE AND THEN CRY IN YOUR BEER – IF YOU CAN AFFORD IT!

This is a terrific, succinct analysis of poverty and immigration.  My only dispute with the presenter his conclusion. (click below)

Poverty explained in world population in gum balls…  Can the US help?
Watch as it is explained…

Can immigration help other countries?   You will be surprised!!

If he suggested we need to begin FIRST with the disenfranchised in our own country, the United States, then I would completely agree with him.

I’m not a fan (nor a regular reader) of the Huffington Post, any more than I am of ‘public’ television or NPR.(No, that’s not true – I dislike HuffPO more, for their outright bombast)  At least NPR tries to have the ‘cosmetic appearance’ of centricity.

Give Me Liberty linked to a HuffPo stat-fest, showing how drug overdoses and traffic accidents accounted for more deaths statistically than firearms!

Now most readers of this blog (all two of you) knew this, but my point is this comes from the Huffington Post!

Does this mean they’re preparing an opinion piece about severely restricting drug access and use or driving?

I kinda doubt it.

Following, as it relates to a blog, is weird.  Of course, blogging unto itself is weird.

When I first began blogging, on the BLOGGER format software, I found there was a means by which a person could be alerted to a new blog post via their email.  Following.  And, after I changed over to WordPress, I noticed a similar function.

It was an amusing and interesting way a blogger can determine who likes what he shares, and enumerated those who do.  Ego gratifying – certainly.  Look!  I’ve another follower, today!

When I left the BLOGGER format, Guffaw in AZ had 48 followers.  Pretty cool for someone who had no expectation of an interested (or any) readership!  And most of these folks seemed to be fellow-travellers.  Like-minded folk – libertarians, gun guys (and gals).  People whose sense of humor was a little off (?)  But then I moved to WordPress.

WordPress bloggers seem to be a whole different animal.  Not all who came by to read and follow are like-minded travellers.  The protocol seems to be – pick up on a stray post, perhaps not the usual twisted, tin-foil hatted, armed kind, and based on that stray post alone, decide to follow me.

And have expectations of reciprocal following!  Look, I’m following you, you’d better follow me!  Some kind of schoolyard paradigm.

I don’t do that.  I prefer using my blogroll, blogs saved in my bookmarks and TGBBL as my guides.  And, I’ve lost some ‘fair-weather followers’ as a result.

As of this writing, I’ve 140 followers!  I suspect about half of which are from my original blog – libertarians, carnivores, gun guys and gals, or folks leaning that way.  The others?  Perhaps tofu-ingesting statists?  I’ve no idea.

“We’re experiencing an epidemic of mass gun murders?” “No one needs a fast-shooting, high-capacity firearm?” Beck presents the solid statistics which show otherwise. “A gun in the home is 43 times more likely to kill the occupants than protect them?” Beck’s new work gives the best layman’s explanation I’ve yet seen as to why that figure,  from a deeply-flawed and long-discredited study, is totally bogus.

Go and read Mas entire assessment, then go read the book.  You won’t be disappointed – even if you find Mr. Beck a little histrionic on the tube.

FTC – neither Glenn Beck nor Massad Ayoob give me anything, now go away!