The Secretary of State

With A Stroke Of A Pen…

(from Chris Farrell’s On Watch, in part)

It’s time for some extreme transparency.

You’ve heard President Trump talk about extreme vetting for persons seeking to the enter the US from terror hot-spots – well, we need to aggressively exercise a similar technique when it comes to government records that you are owed through the Freedom of Information Act or FOIA.

Judicial Watch files more FOIA requests and litigates more FOIA cases than any other organization in the country.  Much of the Washington corruption you have heard about in the news started with investigative work by Judicial Watch.  Cases like “Fast & Furious,” the political weaponization of the IRS, the effort to cover-up Benghazi, Hillary Clinton’s reckless criminality concerning her outlaw email server, and many other cases.

The FOIA law allows for agencies and departments of the Executive Branch of government to make “discretionary disclosures.”  In plain English, that means President Trump and his cabinet secretaries can release whatever they want – whenever they wish to do so.  It’s up to them.  They can exercise their discretion to release records that are of broad general and news media interest concerning important public policy issues and/or the operations of the federal government.  These discretionary disclosures take nothing more than a stroke of the pen.

Ironically, the Department of Justice under Attorney General Sessions is currently making the exact same legal arguments as the Obama administration – and using all the double-talk and excuses from the Obama era, too.  The Justice Department remains in full cover-up mode for anything that would be embarrassing or illegal for the Obama administration.  That’s frustrating and disappointing, but you need to remember that the rank-and-file staff attorneys at Justice Department headquarters are largely Leftists that continue to support the Obama agenda.  President Trump appears to have a tough road ahead.  BUT, it doesn’t have to be that way.

Discretionary disclosures!  Extreme transparency!  With the stroke of a pen, President Trump and his cabinet secretaries can order the release of all government records concerning any number of important issues and lingering questions.

Here’s just a small sample of some of the cases Judicial Watch is investigating and litigating that could be released in full for the public and news media to examine:

If you’re looking for some accountability for what’s happened in this country for the past eight years there’s a starting point.  But, there’s much, much more.

It’s time for extreme transparency.  Let’s get past the cover-ups and double-talk from the past eight years.  Your employees owe you records and answers. President Trump can provide them with the stroke of a pen.

And what about the current administration’s transparency and accountability?

So much for draining the swamp!

Just when you think we’ve learned most of what there is to learn about Hillary Clinton’s emails a new mole pops up out of the hole.

This week Judicial Watch released State Department documents including a declaration from FBI Special Agent E.W. Priestap, the supervisor of the agency’s investigation into Hillary Clinton’s email activities, stating that the former secretary of state was the subject of a grand jury investigation related to her BlackBerry email accounts.

In the filing, Priestap declares under penalty of perjury that the FBI “obtained Grand Jury subpoenas related to the Blackberry e-mail accounts, which produced no responsive materials, as the requested data was outside the retention time utilized by those providers.”

On April 30, 2015, Judicial Watch sued Kerry after the State Department failed to take action on a letter sent to Kerry “notifying him of the unlawful removal of the Clinton emails and requesting that he initiate enforcement action pursuant to the [Federal Records Act],” including working through the Attorney General to recover the emails.

After initially being dismissed by the district court, Judicial Watch’s lawsuit was revived on appeal by a decision of the U.S. Court of Appeals for the District of Columbia Circuit on December 27, 2016.

The FBI convened a grand jury to investigate Hillary Clinton in 2016. Why is this information being released only now?

It is disturbing that the State Department, Justice Department, and FBI are still trying to protect Hillary Clinton.  President Trump needs to clean house at all these agencies.

“An Unaware And Compliant Citizenry”

No, this is NOT a heretofore undiscovered John D. MacDonald Travis McGee novel!

“an unaware and compliant citizenry”

A Clinton campaign email released as part of the Wikileaks data dump earlier today talks about the need to maintain political power by producing “an unaware and compliant citizenry”.
The email was sent to Hillary Clinton’s campaign chairman John Podesta by former Clinton administration official Bill Ivey on March 13, 2016.
MORE

Because, if she had illicit power, the aware and uncompliant would take it from her!

Why The Long Face? 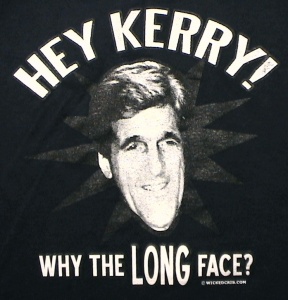 Yesterday’s most ignored headline was that our horse faced, horses ass of a Secretary of State had given Russia what amounted to an ultimatum demanding that all offensive operations against anti Assad forces i.e. ISIS, in Aleppo be halted immediately or all cooperation between the US and Russia would stop.

Never mind the arrogance of such a statement, I would like for these bungling fools to tell us just one thing in Aleppo or all of Syria for that matter, that is worth creating a direct military confrontation between the US and Russia. A confrontation that could well drag us and Europe into another world war.

And no I won’t accept any BS answers about how brutal the Assad regime is or how the assault constitutes s humanitarian crisis. In both cases I would respond, so what? The Assads have ruled Syria with an iron fist for half a century. And if we’re so worried about a body count in Aleppo why aren’t we worried about the body counts in Chicago or Baltimore or our own nations capital? Seems to me this is the same Bashier Assad that old horse face and the Democrats were declaring to be a “great reformer” just a few short years ago when they thought such declarations could be used as a political bludgeon against both the Bush administration and Israel.

The Middle East has been mired in conflicts since Jesus was an apprentice carpenter.  And THIS Secretary of State seems to be as ineffectual and waffley as the last…
(As they both expose progressivism, there is no surprise here)

(Yeah, I know I said I wouldn’t make fun of political figures – but this is too obvious! – Guffaw)

We All Make Mistakes

I’m a tough taskmaster.  Especially on myself.  I recognize my foibles, and as soon as I do make a mistake I attempt to make amends to those whom I have wronged.

I’m certain not perfect at it.

I just cannot wrap my head around those who not only would attempt to control us, but then take no responsibility for their actions.  I don’t understand what must go through the heads of despots and dictators.

Imagine if Stalin or Pol Pot or Hitler (or Woodrow Wilson or FDR) had used their force for good instead of evil?!

Then I see THIS (from Brock Townsend):

Mother of Benghazi Victim: Hillary ‘Ought to Be Wearing Stripes,’ ‘My Son Is Dead Because of Her’

Patricia Smith, whose son, Sean, was killed in the September 11, 2012 terrorist attacks in Benghazi, Libya said that Democratic presidential candidate former Secretary of State Hillary Clinton “ought to be wearing stripes” and “My son is dead because of her” on Monday’s “Varney & Co.” on the Fox Business Network.

Smith said, “My feeling is that she went on TV afterwards, telling everybody that I was the liar, that there’s someone here that is lying, and it wasn’t her, and that I was liar. I want her to apologize to me for calling me a liar on TV, because this is clearly not true. And I want to know why my son was left to die breathing in diesel smoke, which is the most horrible way to die, and she didn’t do anything to stop it. She could have.”

How much of a sociopath does one have to be to be responsible for the murder or incarceration of millions, to then go home, have a nice evening meal and retire for the evening?
And if they were responsible for the deaths of only four?
And then, to personally attack the veracity of a victim’s mother, instead of being contrite and apologizing.
What is WRONG with these people?