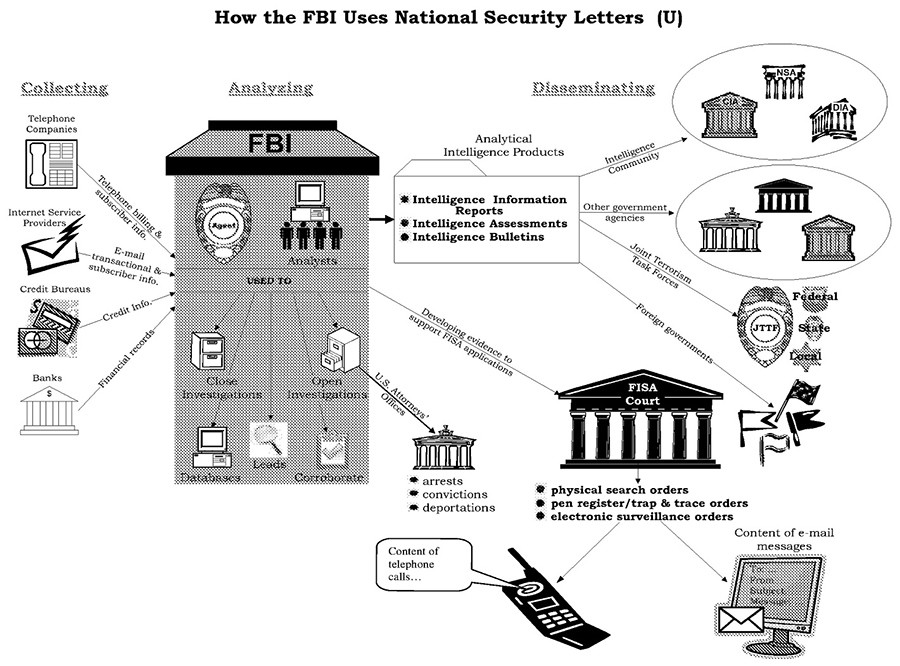 © Office of the Inspector General

As we’ve discussed, some surveillance/law enforcement hawks have tried to rush through a law to expand the power of national security letters (NSLs) to paper over the long standing abuse of NSLs, by saying that they can use those documents (which have basically no oversight and don’t require a warrant) to collect a ton of private info, including email info and web browsing histories. The rushed vote on this — stupidly citing the Orlando attacks, despite the fact it would have done nothing to stop that — failed but just barely. Basically, if Senator Dianne Feinstein were able to attend the vote, it likely would have passed. The support for it was one vote shy, and then Sen. Mitch McConnell changed his vote for procedural reasons to be able to bring it back for a quick follow up vote.

Now, as Congress rushes towards that vote, Senator Ron Wyden stepped up today to use his power as a Senator to put a hold on the entire Intelligence Authorization bill. He gave a short floor speech explaining his reasons.

I certainly appreciate the FBI’s interest in obtaining records about potential suspects quickly. But Foreign Intelligence Surveillance Court judges are very capable of reviewing and approving requests for court orders in a timely fashion. And section 102 of the recently-passed USA FREEDOM Act gives the FBI new authority to obtain records immediately in emergency situations, and then seek court review after the fact. I strongly supported the passage of that provision, which I first proposed in 2013. By contrast, I do not believe it is appropriate to give the government broad new surveillance authorities just because FBI officials do not like doing paperwork. If the FBI’s own process for requesting court orders is too slow, then the appropriate solution is bureaucratic reforms, not a major expansion of government surveillance authorities.

The fact of the matter is that ‘electronic communication transaction records’ can reveal a great deal of personal information about individual Americans. If government officials know that an individual routinely emails a mental health professional, or sends texts to a substance abuse support group, or visits a particular dating website, or the website of a particular political group, then the government knows a lot about that individual. Our Founding Fathers rightly argued that such intrusive searches should be approved by independent judges.

And unfortunately, the FBI’s track record with its existing National Security Letter authorities includes a substantial amount of abuse and misuse. These problems have been extensively documented in reports by the Justice Department Inspector General from 2007, 2008, 2010 and 2014. As one of these reports noted, “the FBI [has] used NSLs in violation of applicable statutes, Attorney General guidelines, and internal FBI policies.” No one in the Senate should be surprised by this pattern of abuse and misuse, because this is unfortunately what happens when federal agencies are given broad surveillance powers with no judicial oversight. In my judgment, it would be reckless to expand this particular surveillance authority when the FBI has so frequently failed to use its existing authorities responsibly.

Of course, to some extent, this is little more than show. It’s pretty clear that McConnell has the votes to get this passed, which is why Wyden has now taken the dramatic step of putting a hold on the bill. But the 60 votes here are usually what is necessary to break a hold (which remains a widely used, but informal, Senate rule). So in the end this won’t mean much, but we’ve been here before again and again and again. And by now it should be clear: When Ron Wyden says that the government is abusing laws to spy on Americans, he’s not lying. We shouldn’t then paper over that abuse and give the FBI or the NSA or anyone else greater powers to spy on Americans. Because they use that power and they don’t tend to use it wisely and judiciously.

Can anyone explain, seriously, why the emergency powers that allow the FBI to do the search in an emergency and then get the warrant after are somehow too problematic? Or why the FBI can’t go and get a warrant at all? It’s a petty quick process for them these days. This whole effort seems designed solely to wipe out what little oversight there is of the FBI and its use of national security letters.  (Techdirt.com)

AND, how much coverage of this was out there in the “press” (again, in air quotes)?
More importantly, why doesn’t the American Public care?

I'm a child of the 50's. libertarian, now medically-retired. I've been a certified firearms trainer, a private investigator, and worked for a major credit card company for almost 22 years. I am a proud NRA Life Member. I am a limited-government, free-market capitalist, who believes in the U.S. Constitution and the Rule of Law.
View all posts by guffaw1952 »
« Please Keep Yet Another Good Thought!
Beware The Ides Of July! »